What is a lemon shake-up and why is it so darn good?

I knew very little about Indiana as a state, and the Midwest for that matter, before my trip last September. As someone who grew up in a suburb east of Atlanta, I assumed states like Indiana are filled with desolate rural towns and literal tumbleweeds.

The time I spent in Indiana, exploring a cluster of towns outside of the city of Indianapolis, showed me a different slice of life – and a different type of drink known as the lemon shake-up.

State fairs and street festivals are a huge part of Midwestern culture. And if you happen to be in Indiana when there’s any bit of sunshine and warmth, expect locals to take to the streets, eating deep fried elephant ears and Oreos, purchasing handmade arts from local artisans and drinking one lemon shake-up after another.

But what is this ubiquitous drink that you’d be hard-pressed to know or hear anything about outside of the Midwest? I tasted one myself and it reminded me of lemonade, but better than any other lemonade I could have had elsewhere. It has a distinct zing to it. 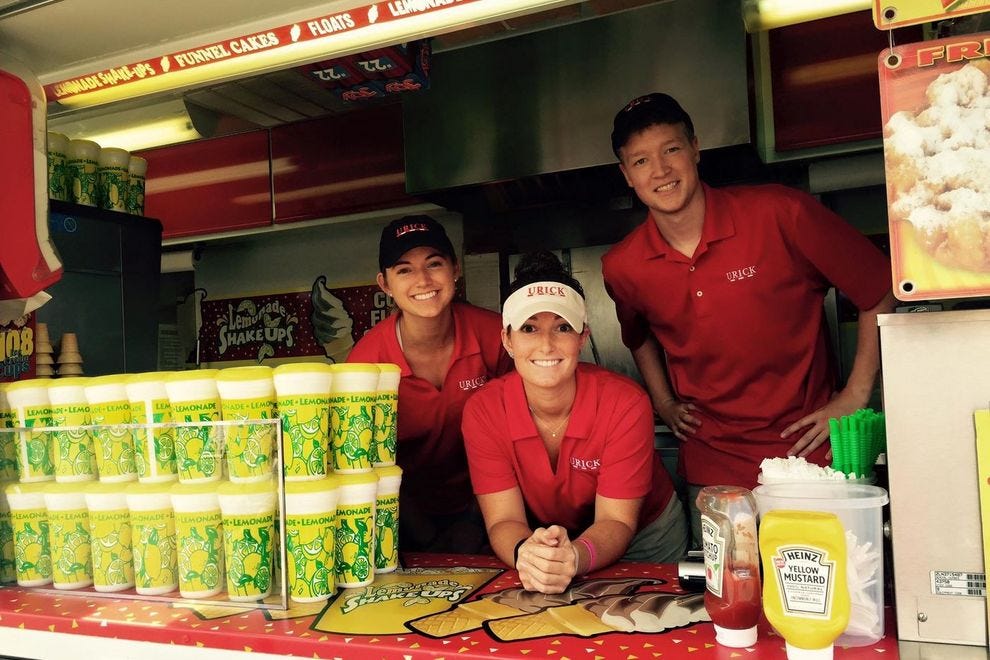 Monica Urick of Urick Concessions has sold lemon shake-ups for the past two decades at major events and festivals throughout Indiana. Though not originally from Indiana, she still vividly recalls her first sip of a shake-up all these years later.

“I’m from Connecticut and they were not a thing back east,” she said. “As a lemonade lover, I needed to see what all the fuss was about! My first trip to the Indiana State Fair was the first time that I had a shake-up.”

She loved that lemon shake-ups were made fresh to order and were very refreshing. And it’s that fond memory she puts into every lemon shake-up she makes for customers, whether at the Indy 500 or the Carmel International Arts Festival.

Urick wouldn’t elaborate on her specific recipe. She insisted it was an exclusive “company secret.” But she did share about their general process for making them. “A traditional shake-up consists of a fresh squeezed lemon, granulated sugar and water,” she said. “Once ingredients are combined, you shake it like crazy to blend all of the flavors, dissolve the sugar and put a really good chill on the drink.”

Adding ice into the mixture before shaking is crucial. The bits of ice add frost to the drink without watering down the flavor. More or less sugar can be added as well, depending on the preference of who makes them.

History is scant on the origins of lemon shake-ups. If you do a quick search online, the only thing that comes up are crowd-sourced recipes and opinions on how much sugar to add and how long you shake the mixture. Some insist that the addition of lemon rinds to the shaking process gives the drink an extra lemon zest. Others add in different fruits like strawberries, raspberries and watermelon, while traditionalists insist on only using lemon.

Urick and her company tend to lean more toward the traditionalists. Though they’ve tried different renditions over time, they’ve always returned to the original lemon shake-up. “Through the years I have seen different flavors come and go, but the tried-and-true lemon shake-up is what folks really look forward to,” she said.

It seems, more than anything, lemon shake-ups are a tradition born from state fair, carnival and festival culture particular to Indiana, especially that of the Indiana State Fair. “Coming to the fair is a joyful experience that brings people back to the happiest of times,” Urick said. “Fun memories with family and friends. Favorite foods [and drinks] that are only available once a year.”

Though Urick Concessions has built their business on the practice of tradition, there is sometimes a little room for innovation. For instance, a few years ago, an alcoholic version of their lemon shake-up was created due to frequent requests from customers.

There’s a lemon shake-up for everyone. And as I discovered, sip after lemony sip, incorporating a bit of tradition and local pride makes Indiana’s lemon shake-up even tastier.

Why you should visit charming Cody, Wyoming

Vote now for the most iconic dishes in the Midwest

Why Your Eiffel Tower Photos May Be Illegal

Is Away Luggage Really Worth It?

Dear cafés, you can do better